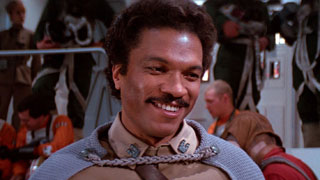 EA has announced the next expansion for Star Wars Battlefront, and it's taking us to Bespin.

If you picked up the Season Pass for Star Wars Battlefront, you're probably ready for the second expansion. EA has now announced what that expansion will entail.

The Bespin expansion will take you to the massive gas planet, and let you visit a number of iconic locations. According to the EA blog post, "You'll see AT-ATs in Cloud City, take to the skies in Fighter Squadron, and even spend time in a carbonite chamber."

The expansion will also add more blasters, more star cards, and two new hero characters: Lando Calrissian and Dengar. You might remember Dengar as the turban-wearing bounty hunter brought in by Darth Vader during The Empire Strikes Back.

The blog post also details upcoming free additions to the game coming over the next few months. They include various events, new Hutt contracts, new content, and confirmation that there will be some special activities for Star Wars Day (May 4).

If you've been looking for an excuse to get back to Battlefront, this could be just what you are looking for.