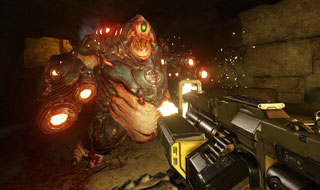 If you didn't get a chance to try out DOOM's open beta this weekend, you've been granted an extra 24 hours to get it done.

The DOOM open beta was supposed to end last night, but id Software and Bethesda have extended it 24 hours. That means that the open beta will now end at 11:59 PM ET tonight.

If you haven't played it yet, you can download it on Steam, on PS4, or on Xbox One.

Opinion on the beta so far appears to be sharply divided, judging from the comments on the Steam announcement of the open beta extension. They range from positive - "I like this new DOOM! Way better than I expect!" and "Keep Doom coming forward because its better than people realize." - to the negative - "1 month to sort it out, or watch your company fall into disgrace," and "I asked for a old school arena shooter, not Call of Duty set on [sic] Hell."

You've got about 15 hours of beta time left. If you check it out, let us know what you think in the forums.