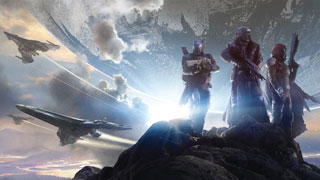 Destiny players may have uncovered the release date of the next expansion hidden within the game.

In the most recent Destiny update, new Prison of Elders arenas were added. Within one of those arenas, you could find a dead Ghost.

As usual in the world of gaming, the Ghost was found and its location reported on Reddit within minutes of the expansion going live. It seemed odd that someone found it that quickly, especially since they had managed to find it, write up a post about it, and get it on Reddit in only 16 minutes. That was enough to catch the interest of gamers, and the story gets even more interesting.

The Reddit post was made by a user named Rezyl Azzir. If you head over to the Grimoire entry unlocked by the dead Ghost, you'll see that it's about a man named Rezyl Azzir. Shortly after this, the post - and the user account - were deleted from Reddit, but not before Redditors noticed one last post from the Azzir account.

The post was in Latin, and read as follows:

Translating that to English, you get (according to Reddit)

"The twentieth day of the ninth month. IT is coming. Forward, to the stars."

Bungie has previously stated that the next Destiny expansion was planned for this fall, and if this was a carefully placed tease, it could mean that we now know the release date of that expansion. September 20 is the third Tuesday of the month, so it wouldn't be surprising to see it roll out then.

That said, online translations are notoriously inaccurate, and despite my best efforts, I couldn't get one to spit out the translation Reddit has. It's best to take all of this with a huge grain of salt until an official Bungie announcement is made.