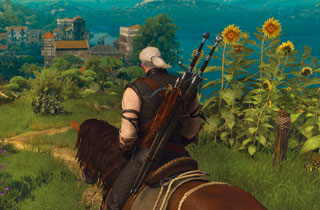 These new screens from The Witcher 3's Blood and Wine expansion give you a look at the areas you'll visit and some of the sights you'll see.

The Witcher 3's Blood and Wine expansion still doesn't have a release date (though there have been rumors), but today we got a handful of new screens showing off the upcoming add-on. Blood and Wine takes player to Toussaint, a new region that Geralt must explore.

The official line describes it as "A land untainted by war, where an atmosphere of carefree indulgence and knightly ritual masks an ancient, bloody secret."

If you can't get enough Witcher 3, you can catch members of the dev team on a PAX East panel named, "GWENT-Ception: Does a Game Within a Game, Make a Game a Better Game?" If you're not a PAX East, you can watch the panel live on Twitch at 2 PM ET tomorrow.

There's a decent chance we'll get a release date announcement in May, as the official email states that they'll be "revealing more information in May." Until then, enjoy these screens.