We've seen games confirmed in many different ways, but using a poop emoji is something completely different.

There have been a lot of rumors swirling about the next Call of Duty, from the title to the reveal date. Yesterday, word was that the new game would include a remastered version of Call of Duty 4.

Today, Activision has apparently confirmed this in the strangest way possible: with emoji. Back in December of 2014, a twitter user named "angus vanderslott" tweeted about the possibility of a remaster and what the consequences might be for his pants. The official Call of Duty account responded in a very...interesting way. 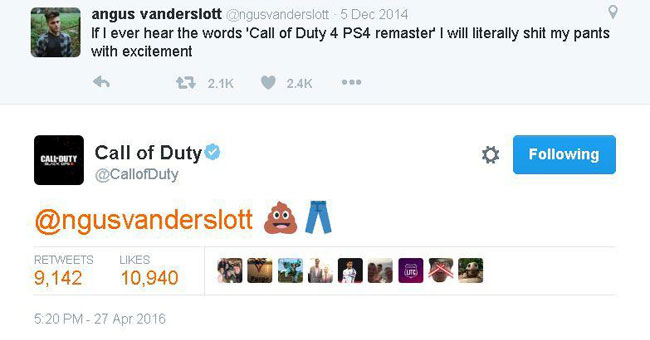 While you can't say that's a for-sure confirmation, it's definitely suggestive. It sounds like it'll be packed in with the new game, which is supposedly titled Call of Duty: Infinite Warfare, and is rumored to have a sci-fi theme. We may know more next week.