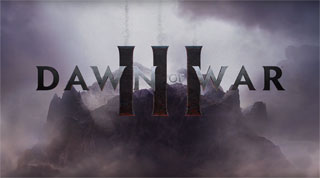 Dawn of War III has been officially announced in a new trailer.

Yesterday, the Dawn of War YouTube channel was teasing an announcement for this morning, and that announcement is now live.

Dawn of War III is real. Veteran RTS studio Relic will be handling the development duties again, and the press release accompanying the trailer will make a lot of fans happy, as it says the new game "combines the epic scale of Dawn of War, with the customization and elite heroes of Dawn of War II."

The trailer shows off a cinematic look at the Space Marines, Eldar, and Orks fighting a massive battle, with many familiar units making an appearance.

In a quote in the release, Executive Producer Stephen MacDonald said, "This is the Dawn of War that fans have been waiting for. Our biggest units ever? Check. Giant orbital lasers? Check. Base-building, epic heroes, huge battles, it's all in there. Get ready for the biggest Dawn of War yet. For the Emperor!"

No release date is given in the trailer, but odds are that we'll be hearing a lot more about it in the coming weeks, and at E3.