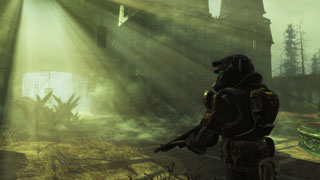 Get a look at the largest DLC planned for Fallout 4 in this new trailer.

Thee first trailer for the upcoming Fallout 4 Far Harbor DLC has been released by Bethesda this morning. It shows off the new area - an island off the coast of Maine - that players will visit.

"In Far Harbor, a new case from Valentine's Detective Agency leads you on a search for a young woman and a secret colony of synths. Travel off the coast of Maine to the mysterious island of Far Harbor, where higher levels of radiation have created a more feral world. Navigate through the growing conflict between the synths, the Children of Atom, and the local townspeople. Will you work towards bringing peace to Far Harbor, and at what cost?"

The Far Harbor DLC will bring new faction quests, new settlements, and new dungeons. You'll also face new enemies, and loot plenty of new gear to use against them. Hopefully, all this content will end up in the Creation Kit as well, so we can see what modders will do with it.