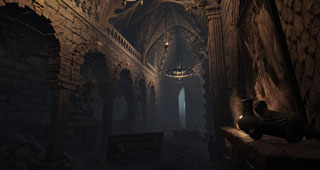 If you can't get enough rat-killing, we've got some good news for you. Fatshark has announced three new DLC maps that will take you and your Skaven-hunting friends outside the Ubersreik region.

Titled Drachenfels, the DLC is coming to PC on May 26, and will add new mechanics to test players.

The Castle Drachenfels map will send you into an ancient ruin, while Summoner's Peak will task you with destroying Nurgle portal to stop the Skaven reinforcements.

The most interesting map (at least to me) is The Dungeons. Not only will you have to deal with enemies, you'll also have to avoid traps and use a torch to see where you're going. The traps will be randomly placed throughout The Dungeons, so you'll have to be on your toes the whole time.

The Drachenfels DLC will launch on PC May 26, but there's no word on what the cost will be. The Schluesselschloss DLC carried a $2.99 price tag, so I'd expect the new DLC to be around that same amount.