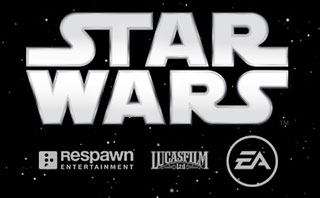 In celebration of Star Wars Day, EA has announced a new game set in the universe.

Respawn Entertainment, the developer behind Titanfall and the upcoming Titanfall 2, is apparently working on a Star Wars game as well. In a post on the EA blog, Patrick Soderlund, Executive Vice President of EA Studios, announced that Respawn is working on "the development of an all-new 3rd person action adventure game set in the Star Wars universe." Interestingly, he also mentions

There's not a lot of other information available yet. The game is being directed by Stig Asmussen, who wrote a blog post about the announcement. In that post, he says that the studio promises to "to pay respect to the Star Wars legacy at all times" with the new title.

Interestingly, Soderlund mentioned in his blog post that "Visceral Games, DICE, Capital Games, BioWare, Motive and more," studios are "currently working on Star Wars projects." Sounds like we're going to get plenty of chances to play in the Star Wars universe.

Hopefully, we'll get a better idea of what the new Respawn game will entail when EA Play takes place in June. Until then, is it wrong to hold out hope that someone is picking up Star Wars: 1313 and bringing it to fruition?