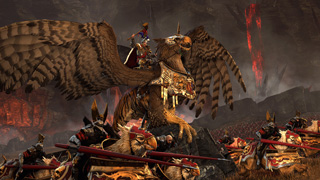 Despite having previously said that Total War: Warhammer would not have official mod and Workshop support, Creative Assembly announced today that both features will be included at launch.

In a bit of a morning surprise, Creative Assembly announced that both mod and Steam Workshop support at launch for Total War: Warhammer. They had previously indicated that this support would not be added to the game.

The press release states that "CA and Games Workshop have been working away on the paperwork to make this much-demanded fan feature a reality." Thanks to this paperwork getting done, fans will be to download mods directly from Steam, as well as manage them from the new Total War Mod Manager (pictured in the gallery below).

The "Assembly Kit," which is CA's version of mod tools, will roll out with some functionality, such as a Database Editor and BOB for "modifying database tables and campaign start positions," with more options being added later this year.

Modders who have been to CA's Mod Summits over the last three years are getting the game and the tools early, and Creative Assembly is working a couple of well-known modders to have mods ready at launch. Magnar is creating a mod to allow Legendary Lords to start in different locations than race leaders, and Dresden is working on a mod to allow every race to settle in every region.

This is great news for modders and gamers alike, so if you ever wanted to do some Warhammer modding, it sounds like you're going to get your chance.