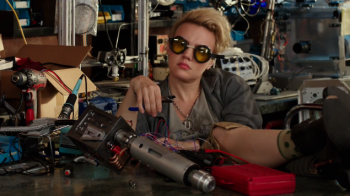 Paul Fieg says the criticism of his upcoming Ghostbusters reboot is from "assholes in geek culture".

Ever since the Ghostbusters reboot was announced, it has been under attack. Ghostbusters is a very special part of geek culture, and reboot direct Paul Fieg has received the brunt of these criticisms. Well, he's sick of it, and he has called out all of the "assholes in geek culture" for attacking his movie.

"Geek culture is home to some of the biggest assholes I've ever met in my life," Feig told the New York Daily News. "I don't care what shape or size or color or anything they are," Feig said, responding to criticism that SNL star Leslie Jones' character merely plays into Hollywood's mad black woman clicha. "I live or die on what things are funny and whether or not people will be entertained by them."

He claims that the all-female cast is a mere co-incidence: the funniest people he knows just happen to be women, which is why he has cast them in the movie.

"(Melissa McCarthy) is just this hilarious woman who is so funny," he said. "I don't care WHAT she looks like. As long as she's funny and is a professional. She's hilarious."

Recently, pundits started a campaign to downvote the new movie's trailer into oblivion. At time of writing, its sitting at 200,000 "likes" and over 700,000 "dislikes.