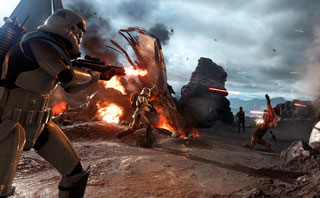 Surprising no-one, EA games has confirmed that a sequel to last year's Star Wars Battlefront will release in 2017.

I hope you weren't expecting EA games to waste too much time on last year's Star Wars Battlefront because a fully-fledged sequel is already in the works, for a 2017 release. Additionally, EA has announced that Visceral Games - the folks behind the Dead Space series - are working on their own Star Wars game, which should be released some time in 2018.

No real details were revealed about Battlefront 2 - all we know is that it will contain content from The Force Awakens, something which the first game deliberately shied away from. As for the Visceral Star Wars game, we know that it is being helmed by Uncharted 1-3 creative director Amy Hennig.

Star Wars Battlefront was released in late 2015, alongside a rather expensive season pass promising a trickle of extra content throughout 2016. I'm sure the announcement of a sequel so soon is will disappoint fans of the game who were hoping that EA and Dice would support the original for years to come, as it did with Battlefield 4.