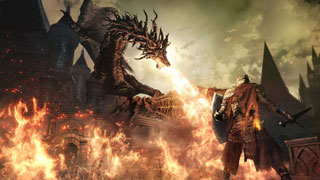 Just in case you weren't aware that Dark Souls 3 was kind of a big deal, Bandai Namco has announced that it has shipped over three million copies of the popular RPG. That number includes 1.5 million copies in North America, one million in Europe, and 500,000 in Japan.

The Dark Souls series has been successful for its entire existence, and has now shipped 13 million copies. That doesn't even include its close cousins Demon's Souls and Bloodborne.

From Software has said that they are done with the series, at least for now, and are currently working on a new IP. They've also not expressed much interest in remaking Demon's Souls. That said, it wouldn't be a huge surprise to see Bandai Namco try to persuade them to bring the series back, or even offer to have another studio pick it up and run with it. I'm not sure that From Software would be interested in that, but you never know what might happen.