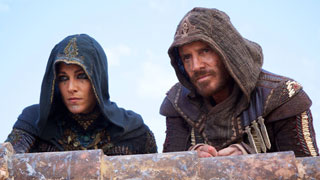 The first trailer for the Assassin's Creed movie looks promising, if they'd just change the music.

The Assassin's Creed movie has been the subject of plenty of rumors over the past year or so, but it looks like it is finally coming to fruition. The first trailer for the film staring Michael Fassbender is now available, and it shows off a look at the film's two settings: a quasi-modern day Abstergo and the Spanish Inquisition of the late 15th century.

At least in this reality, Abstergo has moved from kidnapping people to using those who were executed and then apparently revived. I'm interested to see how this twist on the story plays out, and what they do with the modern-day scenes in the film.

In the trailer, you'll see Fassbender in both his roles: Callum Lynch, and Aguilar - his 15th century Spanish assassin ancestor. Keep an eye out for a brief Jeremy irons sighting as well.

If the first trailer is any indication, the movie is showing some promise, although I can't for the life of me figure out why they chose to set the action scenes to I Am A God by Kanye West. Whether you like the song or not, it just feels out of place from the setting. Hopefully, the movie's actual soundtrack won't make the same mistake.

Assassin's Creed is headed to theaters on December 21, 2016.