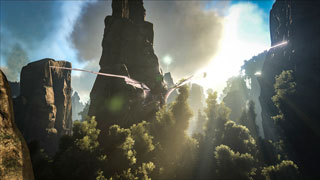 The newest Ark: Survival Evolved update came from a modder, and he was well paid for it, a practice Studio Wildcard plans to continue.

If you've been working on mods for Ark: Survival Evolved, you could possibly make some money off the endeavor. Developer Studio Wildcard rolled out a new map earlier this week title "The Center." It doubled the game's playable area, and most interestingly, it wasn't created by Studio Wildcard. It was made by a modder named Ben Burkat.

Last month, Studio Wildcard announced its Official Mods program, which they said would let them bring mods into the official game, and The Center is the first example of that. Next month, they'll be introducing "Primitive Plus," a mod that removes most of the advanced items in the game, forcing players to make do with only wood and stone items.

Most interesting is the news that the creators of both of these mods were paid for their work, and Studio Wildcard has plans to continue to do so. Lead Designer Jeremy Stieglitz told Kotaku that the company was willing to pay "a considerable amount of money," for mod content. In the case of these first two mods, Stieglitz said that each creator received "multiple months' salary for a creative," in exchange for their work. Both creators were also hired by Studio Wildcard, although that will not be a regular occurrence, he said.

"Going forward, we intend to continue to regularly select what we consider to be the most and most polished Mods from among the many thousands available on Steam Workshop-often identified through open-entry cash-prize Mod Contests, such as the one we're currently running, which we use to gauge community enthusiasm. And then when we determine what we think are the standout exemplars, we'll make more offers."

The Center launched earlier this week, and Primitive Plus is planned for release in June.