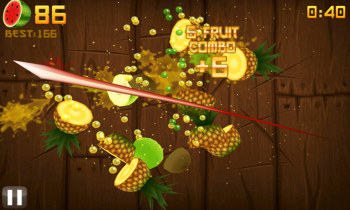 If you thought things couldn't get any stupider than a Tetris movie, think again.

Earlier in the week, we reported that the Tetris movie was moving forward, but today it looks like Hollywood has one-upped itself, with a report from The Hollywood Reporter claiming that a Fruit Ninja movie is in the works. Yeah, Fruit Ninja, that mobile game where you... cut fruit.

Tripp Vinson will produce the movie under his Vinson Films production banner. J.P. Lavin and Chad Damiani, who most recently wrote, How to Survive a Garden Gnome Attack, will pen the script for Fruit Ninja.

Vinson will partner with Fruit Ninja dev Halfbrick Studios for production on the movie. All we know about the material itself is that it will be a " live-action family comedy".