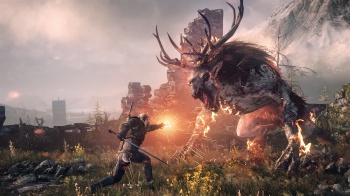 CD Projekt Red says "never say never," but is planning for Blood and Wine to be the last time they visit Geralt's world.

The Witcher 3 - Blood and Wine is coming at the end of this month, and it looks like it will be the last we see of Geralt for a long time - perhaps even ever. In an interview with Eurogamer, CD Projekt co-founder Marcin Iwinski said that the company has absolutely no plans for re-visiting The Witcher any time in the foreseeable future.

"As we said before, never say never [but] right now it's really Blood and Wine. This is the end. Blood and Wine is [the] closing and there won't be any Witcher any time soon - if there ever will be one. And I would really like to see how people feel about it, if they will enjoy it," said Iwinski.

"We don't have anything planned as of now to be honest on the next Witcher."

So what's next for the studio? Those who have been following closely will know that CDPR's next big title will be Cyberpunk 2077 - a new IP for the studio that will take the form of a science-fiction roleplaying game. It will be released sometime after 2017.

Down the line, the studio plans to release a second AAA RPG at some point in the next six years. Further than that is anyone's guess, but it looks like The Witcher 4 will be stored in the same "break glass in case of dire emergency" vault that Half-Life 3 and the Pokemon MMO are in.

If you've still got a hankering for Geralt after Blood and Wine is done and dusted, might I suggest reading the books? They are actually really good.