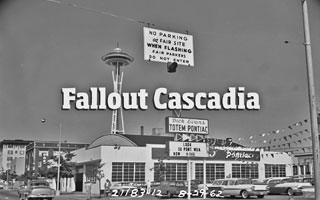 The Fallout Cascadia mod has some ambitious goals, including having "more quests and locations" than the Fallout 4 Far Harbor DLC.

Fallout 4's Far Harbor DLC is out now, and it's one of the largest add-ons Bethesda has ever released. Now the mod community is going to try and top it with Fallout Cascadia.

This new mod will take players to the Pacific Northwest - specifically, Seattle, Washington. It's a standalone adventure that takes place several decades after the events of Fallout 4. You'll have to start a new save, and there won't be a way to travel between the Pacific Northwest and the Commonwealth, unless someone else makes a mod to allow it.

In describing the mod, the official site says, "Many locations of the game focus around the city proper, including certain fair grounds, public markets, and other famous locations. The game will also include other locations to the west and south including Mercer Island, Redmond, Bellvue, forested areas and airports." The scale is also mentioned, with the description reading, "The scale of this project is a land area that is just a bit smaller than Fallout 3, but more quests and locations than Fallout 4's Far Harbor DLC."

Work on this mod started about six months ago with a team of 18 modders, and that team says that the mod will be free. The team plans to release the mod on Bethesda.net for PC, PS4, and Xbox One, but there are no guarantees that it will work on consoles at this time.

There's now word on when Fallout Cascadia might be released, other than a vague reference that, "The expected release is several years away." Of course, if the team can add more members, we might see it sooner. Coincidentally, the mod team is looking to add to its numbers. You can find all the info at the Fallout Cascadia website.