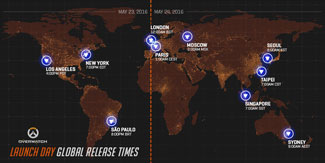 Depending on where you are in the world, you could be playing Overwatch at 4 PM today.

The official Overwatch release date is tomorrow (May 24), but if you're on the west coast of the US, you'll be able to play as soon as 4 PM PT today. That's because Blizzard is going to repeat the release plan they used in beta, and open up the servers simultaneously across the world.

At midnight tonight GMT, Overwatch will go live. In Los Angeles, that's 4 PM this afternoon. By contrast, it launches at 8 AM tomorrow in Japan.

There's a comprehensive list of launch times over on the game's official site. You can also find installation instructions for all platforms, support links, and even where to buy the game if you haven't yet.

Until Overwatch launches, you can catch up on the game's lore or watch the latest animated short. You won't have time for that later, since you'll be too busy playing.