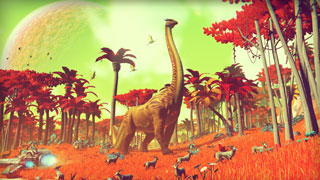 UPDATE: Sony has updated the official PS4 No Man's Sky page with a new release date of August 9, 2016. Looks like the delay is real.

ORIGINAL STORY: The word is that procedurally generated space exploration title No Man's Sky has been delayed from its June release.

If you've been looking forward to blasting off and exploring the massive open universe that No Man's Sky is promising, your wait may be a bit longer than you'd hoped. According to a report on Kotaku, multiple source have informed the site that the game has been delayed into July or August.

While one source is simply referred to as "A reliable Kotaku source," the other is identified as working at GameStop. That second source said that while the store had received marketing materials for the game that showed the No Man's Sky release date as June 21, the stores were also told to cover that date with a "Coming Soon" sticker, as it was no longer accurate.

No Man's Sky is an ambitious game from a relatively small developer, so a delay wouldn't be the biggest shock in the world. I'm sure that gamers would rather end up with a good game a couple of months late than a broken game that releases on time.