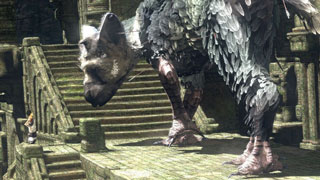 After almost a decade in development, The Last Guardian will apparently finally release later this year.

The Last Guardian has taken its place at the head of the "games that might never be released" list ever since Duke Nukem Forever came out. But it might shake off that title, as it will apparently finally see the light of day this year.

According to to the cover story in the latest issue of Edge Magazine, the long-awaited game will release later this year. Game director Fumito Ueda is quoted as saying, "Since this is the year we will see the game's release, I do have some worries, but I'm also very excited."

The Last Guardian is the tale of a young boy and the strange animal that he befriends. Part cat, part bird, and part something else, the beast is know as Trico. It can shoot red lightning from its tail at a target you designate, but you never have complete control of the creature. In fact, Ueda said that he didn't want to make a game like that, and that Trico is a "free-spirited creature that flagrantly disregards your attempts to tame it."

There's still no official release date given yet, but you can bet that we'll hear all about at E3 next month.