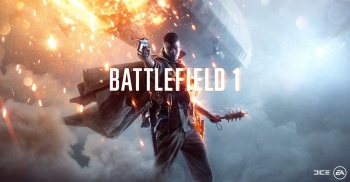 Some debate about Battlefield 1's World War 1 setting was concern that younger gamers don't know that the war happened.

Battlefield 1's World War 1 setting was a huge breath of fresh air in a market dominated by "modern military shooters" (spunk gargle wee wee). But as we've heard before - it almost didn't happen. There was a lot of internal pushback against the WW1 setting, and EA CFO Blake Jorgensen told GameSpot that chief among that pushback was a concern that younger gamers don't actually know that World War 1 was a thing that happened. Seriously.

"World War 1, we were worried that many of the younger consumers out there didn't know that there was a World War 2 or Vietnam, so World War 1..." Jorgensen said.

He also said that there was this consensus out there that trench warfare couldn't be fun, but the DICE team managed to convince the higher-ups that WW1 was so much more than just two armies shooting at each other from trenches.

"I think what people don't understand about World War 1 is the technology shift that went on during the war. People started the war on horseback and ended the war with airplanes and tanks and battleships and submarines. And that's a huge opportunity for us to be able to do a video game around."

Does anyone else find it really concerning that they were worried about young people not knowing World War 1 was a thing? What do they teach kids in schools these days?

Battlefield 1 launches on October 21 for the PC, Xbox One and PS4.