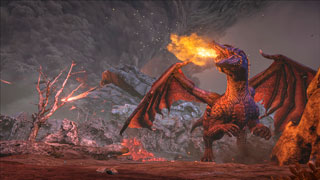 Ark: Survival Evolved is a year old, and they've released a new patch and a new boss to celebrate.

The newest patch for Ark: Survival Evolved is now live, and it's helping to celebrate the open-world survival game turning one year old. The biggest addition is the Dragon boss fight and Dragon arena, both of which allow players to take on the fire-breathing monster.

Also included in this update is a week-long birthday event. You can find candles that let you make Ark birthday cakes. When each candle is blown out, players will see a special birthday message, and receive exclusive gift items from party hats to 'birthday suits.'

The patch also adds the Diplodocus, which can be equipped with a saddle that allows it to carry up to 10 passengers, each of which can fire their ranged weapons while riding. The final additional creature is the Leech. As its name suggests, it will attach to any nearby living creature to drain its blood, and only a blade or fire will remove it. It's not tamable, but its venom can be used to make a powerful anti-venom.

Those are the high notes, but you can see the full list of changes and additions in this post on Steam Community site.