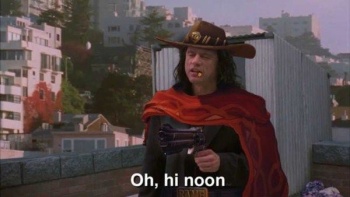 Overwatch cheaters are discovering that even buying a new copy of the game won't save them from the banhammer.

When Blizzard said that it was taking a "zero tolerance" stance on Overwatch cheaters... well, they really freaking meant it. Blizzard has reported that several banwaves have already gone out, and Chinese partner NetEase reports that over a thousand accounts have already been permabanned.

If that's not enough, reports from cheaters themselves seem to suggest that even if you buy a new copy of the game, Blizzard will ban you again. Permabanned means permabanned - not just from Overwatch but from all Blizzard titles on your battle.net account.

PC Gamer reports that aggrieved posts on the forums of popular hack providers are recounting tales of teary-eyed cheaters down on their luck. "Got banned one day after the official release," one user recounts. "Thought I got detected for using RPM tools, because the game was crashing for it at that time.

"Bought the game again... didn't hack on it at all, just wanted to enjoy the game a bit. Two days later-banned again.

"Bought the game... again. But before doing that, I deleted Overwatch and launcher completely. Enjoyed it again without cheating only for a day."

To add insult to injury, NetEase actually went one step further and publicly revealed the usernames of everyone banned for cheating. BigHardBlack#5339, I fucking knew it! Screw you and your impossible McCree aim.