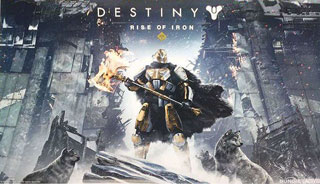 Bungie will reveal the next Destiny expansion next week, and we'll certainly see it at E3.

In their regular "This Week at Bungie" post, the company announced a livestream next week that will reveal the next Destiny expansion. Scheduled for Thursday, June 9 at 1 PM ET, Bungie says the stream will offer a "first glimpse at what awaits you later on this year, followed by a deeper dive with the development team."

There have been reports on Reddit that the new expansion will be titled Rise of Iron, and there's even a couple of photos of a promotional poster that looks pretty legitimate. It features a Titan carrying a flaming two-handed axe while surrounded by wolves.

We'll have to wait until next week to find out for sure, but you can bet we won't see too much action from the expansion in the stream, as they'll probably save the actual gameplay for E3.

Here's a second photo of the poster that was posted in the same Reddit thread linked above: