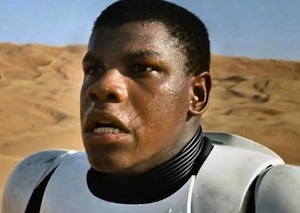 The Force Awakens' Finn is set to be the lead for Guillermo del Toro's upcoming Pacific Rim sequel.

John Boyega, best known for his role as "Finn" in Star Wars: The Force Awakens, has been signed on to star in Guillermo del Toro's upcoming Pacific Rim sequel. According to the report from Deadline, Boyega will play the son of Idris Elba's character, Stacker Pentecost, from the first film.

"The Pacific Rim universe will be reinforced with him as a leading man as it continues to be a multicultural, multi-layered world," del Toro said. "'The World saving the world' was our goal and I couldn't think of a better man [than Boyega] for the job."

Pacific Rim was a pretty awesome movie. It had giant robots fighting monsters and really, that's all I needed. The fact that it was the brainchild of legendary filmmaker Guillermo del Toro simply added to its awesomeness. Unfortunately, for some reason, it wasn't as well received by some terrible people, which led to it being cancelled.

Del Toro then promptly un-cancelled the movie, and now with the casting of Boyega, we can be assured that Pacific Rim 2 is a proper thing that is actually happening.

Steven S. DeKnight is directing the film, which will begin production in the fourth quarter of this year.