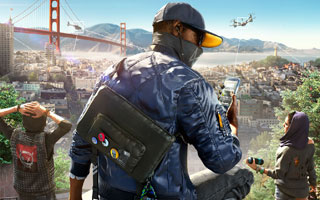 Ubisoft has officially announced Watch Dogs 2 with a new trailer and information on the game's various editions.

As scheduled, Ubisoft held an announcement event for Watch Dogs 2 today. There have been a number of leaks of Watch Dogs 2 information this week, so there's very little surprising information in today's announcement. That said, it's nice to finally have everything out in the open.

Watch Dogs 2 casts you as Marcus Holloway a young hacker accused of a crime he didn't commit. As in the first game in the series, you'll hack the ctOS system to your benefit, taking over vehicles, adjusting city systems, and generally wreaking havoc. Set in San Francisco, the game let you explore that city, as well as Oakland and nearby Silicon Valley.

It will be available in three different editions:

If the Collector's Edition is your thing, you can get it with any of these editions. Just pre-order on the Uplay shop and you'll get your desired edition plus an exclusive Wrench Junior motorized robot that you can control with a smartphone app.

If you want to watch today's presentation, you can see it all right here.