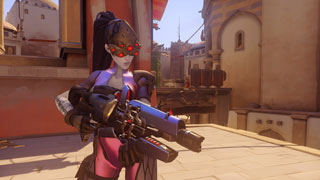 Blizzard says they're looking at rebalancing Widowmaker, Overwatch's sniper, to make her less frustrating to opponents.

If you're playing Overwatch it's almost certain that you have your own thoughts on what needs to be nerfed or rebalanced, but for right now Blizzard is working on McCree and considering changes to D.Va. But in a post on the game's official forums, Game Director Jeff Kaplan said that "Widowmaker is on our radar" for changes as well.

While Kaplan doesn't go into specifics about what changes might be under consideration for Widowmaker, he does say that the team is discussing how to proceed with her, and that they "have some internal experiments going to see if we can keep her viable while lowering the frustration threshold a little bit."

The ensuing thread is full of perspectives, from people who think that Widowmaker is fine and doesn't need any adjustment to those praising the idea of a nerf. While we'll have to wait and see what Blizzard decides to do, we'd love to hear what you think of Widowmaker so far. Let us know in the forums!