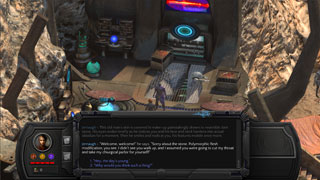 inXile has announced that Torment: Tides of Numenera will not release this year as planned.

Torment: Tides of Numenera has had a bit of a troubled history, at least as far as its release date is concerned. Originally planned for a December 2014 release (according to its Kickstarter at the time), it was pushed back a couple of times, finally landing in Q4 2015, and then got delayed into 2016. This morning, the game suffered another delay, with its release date now set for Q1 2017.

Although Torment has been on Early Access since January of this year, inXile says that there are two big steps left for the game to be ready for launch. First, although the game is no playable from start to finish, it needs finishing touches and testing. Second, the developer wants to localize Torment into languages besides English.

In an update to the game's Kickstarter page, Brian Fargo wrote that, "This localization is no small feat (not to mention costly!), but we have a secret weapon." That secret weapon is new Torment publisher Techland, who will be bringing the title to retail. This will be the first game published by Techland.

Writing about the localization and delay, Fargo said,

"All said and done, our combined iteration and localisation efforts are looking to be a 6-month process. So, we have two paths open to us, a bit of choice and consequence, if you will. Those of you who have been following our updates know we have been hinting towards a late 2016 release, and we could crunch and rush to get the game out around November. But doing so would mean both sacrificing the quality of our localisation and would lead to a less polished game for the nearly 100,000 people total who have backed the game. Therefore, in the interests of giving everyone the best experience, we will be releasing Torment in early Q1 2017."

Although it's a letdown for backers, inXile is letting everyone who backed the game for $20 or more into the Early Access beta. Still, that's small comfort for those who've been waiting for the full release since the Kickstarter was funded over three years ago.