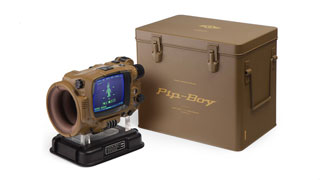 In the wake of their E3 press conference last night, Bethesda has announced the new Pip-Boy Deluxe Bluetooth Edition.

If you've always wanted a Pip-Boy, Bethesda has one for you, provided of course that you're willing to spend $350. Sure, you might have picked up the Pip-Boy Edition of Fallout 4,

Unlike the unit that shipped with the Fallout 4 Pip-Boy Edition, the Pip-Boy Deluxe Bluetooth Edition doesn't require you to insert your phone. Instead, it's got its own screen and software. Most of the knobs, dials, and buttons on the Pip-Boy actually work, and you can pair it with your cell phone to make and answer calls, read your messages, and play audio files. If you don't pair it, you can still use the device as an alarm clock, or just as part of your latest Fallout cosplay costume.

Even the holotape drive pops open on top, revealing a holotape that is actually a USB drive. It comes with a stand that will both charge the device and act as a larger Bluetooth speaker when the Pip-Boy is onboard.

Bethesda will only be selling 5,000 of the Pip-Boy Deluxe Bluetooth Edition, and the odds are that it will sell out quickly, so if you want one, you should probable head over to Bethesda.net and pre-order it. The device is set to ship November 11, 2016.