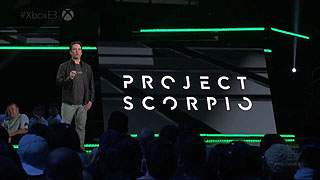 Just when you thought Microsoft's press conference was over, they announced their second console of the day.

As Microsoft's E3 press conference drew to a close, it seemed as though we'd seen all the company had to offer, including the new Xbox One S. But before Phil Spencer walked off the stage, he dropped another new Xbox on the crowd: Project Scorpio.

The console had been rumored in previous weeks, and as was thought, it's a performance-focused console. It features a GPU that offers six teraflops of power, which is slightly better than a GTX 980, but slightly less than the GTX Titan. It's still a whopping 33% less than the new GTX 1080. Scorpio will also feature an eight-core CPU, and Microsoft says it will support 4K gaming at 60 frames per second, as well as VR.

There's no word on what VR headsets Scorpio will support, but with Fallout 4 and DOOM heading to HTC Vive, it wouldn't be a surprise to hear that Scorpio would support it.

Microsoft was quick to say that all games and peripherals that work on Xbox One and Xbox One S would be fully compatible with Project Scorpio. Spencer touted this new machine as "gaming beyond generations," and said it would be the beginning of hardware improvements that don't mean getting rid of your gaming library.

Scorpio looks like it will be a pretty solid piece of hardware, but you have to wonder what its announcement will mean to the sales of the Xbox One S, the other console announced today.