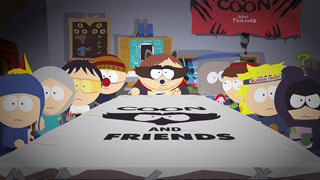 Ubisoft brought Matt Stone and Trey Parker onstage at E3 to share lots of info about South Park: The Fractured But Whole, including a new trailer.

There's a new South Park game in the works, and at E3 today, Matt Stone and Trey Parker took to the Ubisoft press conference stage to talk about we can expect. In South Park: The Fractured But Whole, you're back in the shoes of the new kid, and despite your victory in The Stick of Truth, the kids are back to seeing you as the douchebag again.

They've left the fantasy world behind, and instead, the kids are playing superheroes. Despite having a great plan to build a billion-dollar superhero franchise, the kids can't agree on how to proceed, and now they've split into two teams, and are fighting a civil war. There's also a new trailer.

Ubisoft also announced that anyone who pre-orders The Fractured but Whole will receive a free copy of The Stick of Truth as well. South Park: The Fractured But Whole release on December 6, 2016 on PC, PS4, and Xbox One.