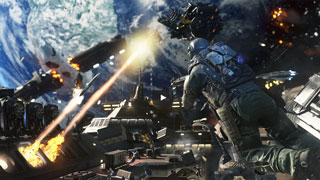 The gameplay trailer for the newest Call of Duty title was shown off during Sony's press conference last night at E3.

There's a new Call of Duty every November. That's about as close to reliable as it gets in the gaming industry, especially in recent years. But when Sony showed off PS4 footage of Call of Duty: Infinite Warfare last night, a strange thing happened. I couldn't immediately tell it was Call of Duty.

The gameplay trailer kicked off in space, and had you piloting a fighter-jet type of spacecraft. The main character then exits the craft, boards another ship, and disables it. Once the shooting kicked in, the game was much more familiar, but for the first time in years, a CoD game made me sit up and say, "I wonder what this is?" The move to the future and the addition of zero-g combat and maneuvering kept me guessing for a bit.

The official description of the trailer reads like this:

Reyes and his crew infiltrate and take down an enemy SetDef destroyer. Launching from the UNSA Retribution, the SCAR team must engage in intense Jackal dogfighting and close-quarters combat through zero-g to accomplish a coordinated assault with the UNSA Tigris.

Of course, making it intriguing doesn't mean that it's a good game, but that said, I'm feeling very willing to give this new Call of Duty a chance after seeing this footage.

Call of Duty: Infinite Warfare releases November 4, 2016 on PC, PS4, and Xbox One. If you pre-order an edition that includes the Modern Warfare remaster on PS4, you'll get access to the CoD 4 campaign 30 days early.