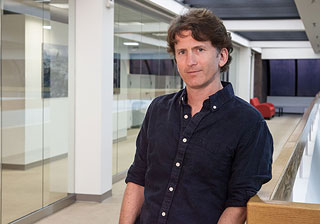 If you're looking forward to the newest Elder Scrolls game, you may have a long wait ahead of you.

Now that Fallout 4 is nearing the completion of its DLC, Bethesda fans are thinking of one thing: a new Elder Scrolls game. While there will certainly be another game in the series, it may be some time before we see it come to fruition, according to comments made by Bethesda's Todd Howard.

Speaking to IGN's Geoff Keighley, Howard said that the next Elder Scrolls game was "kind of like the elephant in the room always when we talk about anything. And I think it's good in these moments to tell our fans, 'Yes, of course we are. It's something we love.' But it is-you know, I have to be careful what I say-it's a very long way off."

Also interesting was Howard's statement that the company is working on two other projects. "And we actually have two other large projects we're also doing that are bigger than anything we've done," Howard said. "People will probably hear about those probably even before Elder Scrolls VI. And that'll make sense many years from now."

It's no surprise that there's another game in the Elder Scrolls series being discussed. After all, it's one of the most successful series in the history of the industry, and Bethesda won't let that go. I'm just curious as to what those two other projects could be.