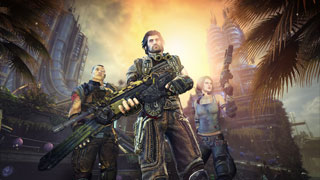 A remaster of People Can Fly's 2011 shooter Bulletstorm is apparently in the works.

If you were a fan of the raucous 2011 shooter Bulletstorm, you might find this interesting. Microsoft is apparently working on a remastered version of the game.

At E3 this week, the company is handing out USB drives full of game assets, and on that drive is a folder titled "Bulletstorm Remaster." Within that folder are screenshots, a photo of the original game's cast, and even some 4K shots. The shots were located by Polygon's Nick Robinson.

There's been no official announcement yet, so despite the presence of these assets, we'll have to wait and see when this might come to fruition. That said, Bulletstorm was a really fun shooter, so it's nice to see that it just might be coming back around again. Now that People Can Fly is an independent developer again, maybe they'll get busy on a sequel.