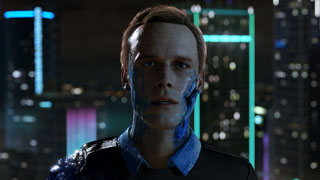 Way back in 2012, David Cage was showing off a new engine using a short film about an android named Kara. This week at E3, we got to see where that short film led: to the new Quantic Dream game Detroit: Become Human. First announced during Paris Games Week last year and set in a near-future Detroit where androids have replaced humans in many professions, the game centers around a mysterious event that affects the androids in a variety of ways.

The E3 trailer focuses on an android named Connor. He's an advanced version of android designed to help the police investigate cases that involve deviant androids. Connor appears on the scene of a hostage situation where a deviant android i threatening to jump off a rooftop holding a little girl. Whether or not the girl survives is up to you. Your choices and decisions will shape the outcome of the situations you encounter.

Every decision will have consequences, either in the immediate situation or later in the game. Every character in the game can die, and the story will continue without them.

There's no release date for Detroit: Become Human yet, and obviously, it's a PS4 exclusive.