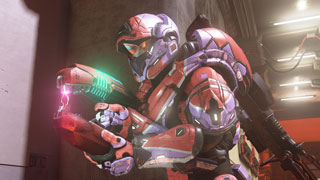 343 Industries is adding a new cooperative multiplayer mode to Halo 5: Guardians next week.

The biggest free content update yet for Halo 5: Guardians is scheduled to release next week on June 29. It will add the new Warzone Firefight cooperative multiplayer mode, as well as new bosses and vehicles.

Also included in this update is the Score Attack mode, which will let players compete against their friends for high scores and medals in the game's campaign. There will also be three new maps:Attack on Sanctum for Warzone, Prospect for Warzone Assault, and Molten, a new arena map. Forge mode will also get a new canvas called Tidal.

Finally, there are a number of new REQ items in this update as well, including new Cinder and Cyclops armor sets, new weapon skins, new Covenant vehicle and weapon variants, and more.

If you want to see what the new update is all about, Microsoft will be streaming the new content on the Halo Twitch channel June 28 at 5 PM ET.

If you don't own Halo 5 yet, you can download and play the game free from June 29 to July 5, and if you like what you see, you can buy the game for half-price during the same time period.