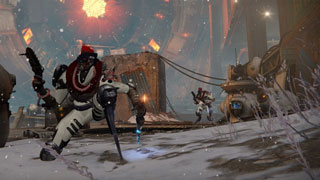 The next Destiny expansion isn't coming to PS3 and 360, but some major changes are.

If you're still playing Destiny on PS3 and 360, you're probably already aware that the Rise of Iron expansion isn't coming to your console. If you're wondering what the future might hold for Destiny on older consoles, Bungie has published a post that covers exactly that.

According to that post, starting in August 2016, all future Destiny updates will be available only on PlayStation 4 and Xbox One. Bungie said, "The PlayStation 3 and Xbox 360 consoles will be considered Legacy Consoles and will no longer receive major updates and content releases."

While previous expansions will still be available, Bungie did say that players on "legacy consoles" will have "limited access to some Destiny events." Heroic missions and strikes will continue to be playable, as well as Crucible challenges (both daily and weekly). Also still active will be raid and boss encounters, including Crota's End, Vault of Glass, and King's Fall (including the weekly boss challenges). Prison of Elders, Challenge of Elders, Armsday Orders, and Test Weapons will also continue to be available. You can also expect rewards as normal.

Xur will continue to appear in the tower or Reef, but his inventory will be different, with these changes being implemented:

These changes will definitely be disappointing to Destiny fans who haven't upgraded to a current-gen console yet, but they aren't terribly surprising. Bungie was likely reaching the end of what they could accomplish with last-gen tech, and continuing to hold back its new content to make it work on old tech wasn't an option they liked, apparently. When the company announced that Rise of Iron wasn't coming to last-gen, the writing was on the wall. You can read the full post about the changes here.

These changes will all kick in this August, and Rise of Iron launches on September 20.