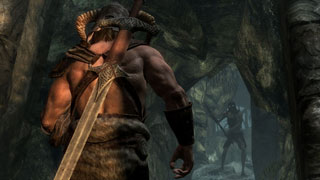 Bethesda will make another chapter in the Elder Scrolls series, just not yet.

During a stream at E3, Bethesda's Todd Howard was asked if Bethesda was working on the next entry in the venerable Elder Scrolls series. He replied, "Yes, of course we are," while stressing that the game was also a long way off. Over the weekend, Bethesda's Vice-President of PR and Marketing, Pete Hines, threw that statement into doubt.

In a post on Twitter Saturday, Hines plainly stated, "We aren't working on TES6 at the moment." That may seem to be a direct contradiction of Howard's comments at E3, but it's worth noting that Howard himself did say that there were "two other large projects" in the works at Bethesda. He also said that we'd see both of those projects before another Elder Scrolls game, so it's completely reasonable to think that they haven't begun working on TES6 yet.

That would also line up with Hine's other statement on Twitter over the weekend. When asked if he could estimate when TES6 would come out, he replied, "Nope. Years and years."