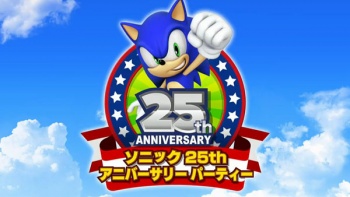 We have no details on the new Sonic game, announced during a 25th anniversary celebration of the blue hedgehog.

Sonic fans are in for a treat (or more disappointment) next year, as Sonic Team boss Takashi Iizuka has revealed a new title starring the blue hedgehog will release in 2017. The game was confirmed at a special 25th anniversary event in Tokyo this week, although we weren't given any additional details. Iizuka instead told us to tune into another Sonic birthday party, this time on July 22 in San Deigo, for more info.

"We at Sonic Team are developing a completely new game," Iizuka said earlier this week. "The most important thing is not the fact that the series survived for 25 years, but how many games [were] developed. Our goal [is to] add something new and overcome any potential hardships."

There is actually a Sonic game due out this year: Sonic Boom: Fire and Ice for the 3DS, based on the Sonic Boom anime. The last "real" Sonic game was the episodic Sonic 4, released back in 2010/12.

Here's hoping that this new game, especially considering the 25th anniversary, takes Sonic back to his roots!