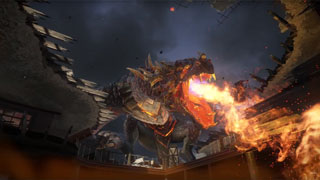 As if zombies aren't bad enough, now Call of Duty is pitting you against fire-breathing dragons.

The next Call of Duty: Black Ops 3 DLC is titled Descent, and it brings four new maps and a continuation of the Origins storyline in Zombies mode.

The official description of the new episode of the Origins storyline contains a surprising addition. It reads, "After escaping the swamps of Zetsubou No Shima, the Origins characters are hurled into a war-torn Stalingrad. Our heroes face their most dangerous enemies yet among the remnants of a battle between giant mechanized soldiers and ferocious dragons."

As you can see in the trailer below, Call of Duty is getting a fire-breathing dragon. The newest Zombies mission is titled "Gorod Krovi," and will require players to not only take on zombies, but to dodge fire from dragons as well.

In addition, the DLC will add four new multiplayer maps:

Descent launches on PS4 July 12, with the PC and Xbox One versions to follow later. It will set you back $15 unless you already own the Season Pass.