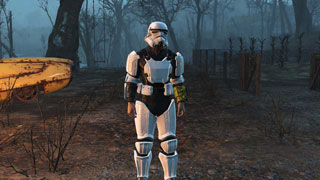 It looks like mods won't make it to PS4 in July, and Bethesda isn't saying when they might arrive.

Fallout 4 mods have already made it onto Xbox One, and Bethesda was hoping to roll them out on PS4 this month. There were some snags, as we reported a couple of weeks ago, including file size restriction, performance issues with PC textures, and a lack of compatible sound files.

Either Bethesda has run into more issues, or the existing ones have proven difficult to overcome, because today the company announced on Twitter that the beta for mods on PS4 was being delayed. No updated release window was mentioned, with the company saying only that it would "update everyone when we can." It stands to reason that this means the full release of mods has been delayed as well.

We regret to say that the PS4 Mods Beta for Fallout 4 has been delayed. We will update everyone when we can.— BethesdaGameStudios (@BethesdaStudios) June 29, 2016

While it's unfortunate that mods are running into these issues, it's worth noting that Bethesda is breaking new ground here, so it's to be expected that they'd find issues that others might not have run into. Still, it sucks if you're a PS4 player anxiously awaiting the arrival of mods on your console.