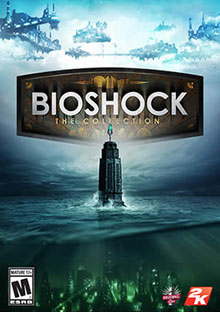 It looks like a remastered Bioshock collection is actually going to happen.

Ever since the ESRB listed Bioshock The Collection back in April (before taking it down again), fans of the series have been waiting for 2K to follow through and announce the inevitable remaster. Today, that announcement appears imminent, as 2K's site briefly showed the collection, along with the box art.

The page for the game was only up for a short while, and has since been taken down, but IGN was able to take a screenshot (seen below) while it was up. They also grabbed the box art and a wallpaper that were both hosted on 2K's servers.

The now-deleted ESRB listing revealed that the collection would contain "Three first-person shooters in which players assume the role of characters uncovering the mysteries behind the dystopian societies of Rapture and Columbia." That would seem to indicate that the collection will include Bioshock, Bioshock 2, and Bioshock: Infinite.

Taking all of this together, you have to think that it's likely we'll see this collection announced soon. Once it finally releases, it will be a boon for anyone that never got to play the original.