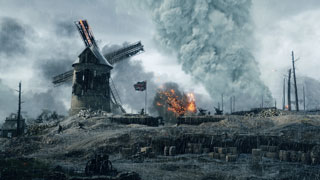 Everyone know that the Frostbite engine turns out some nice looking games, and we're all expecting Battlefield 1 to continue that trend. If these new screenshots are any indication, it won't disappoint.

Taken during EA Play (EA's E3 event) by Imgur user berdu, the screens show off the game's spectator mode, and appear to feature a single map. Berdu's disclaimer on the gallery states that "These screenshots are sponsored by EA, meaning they paid for my flights and hotel for EA Play at Los Angeles."

Windmills, ruined buildings, and observation balloons can be seen in the shots. Taken together, you'll be able to see how destruction affects the environment, as well as how fog and rain can affect visibility.

Obviously, these screens represent the absolute best the game will look, as it was likely running on a PC with some insane specs. Still, even if you have to dial it back a bit, Battlefield 1 still seems like it will look great. Now we just have to hope the gameplay lives up to the visuals.