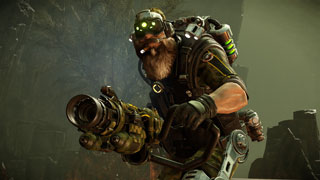 Evolve: Stage 2 - the free-to-play version of Evolve is launching its beta on Steam today.

Yesterday, Evolve disappeared from Steam, and a countdown appeared on the game's official site. This morning, we found out what that countdown was for. Evolve is returning to Steam as Evolve: Stage 2, and it will be free-to-play.

The announcement comes through a post on the game's official forums from Turtle Rock co-founders Chris Ashton and Phil Robb. The post explains the changes that are coming, and what prompted them.

Evolve: Stage 2 will be launching a beta of its new free-to-play model today. The beta will be used to test servers and features, and the post says that the process will take place "over a period of weeks and months."

If you own the retail version of Evolve, your first question is probably, "What does this mean for me?" The official word is that anyone who owns "classic" Evolve will be given "Founder" status in the Stage 2 release. You keep all content that you own, and there will be future gifts, rewards, and special access.

There's no word on what will happen with the console versions of the game, but my guess would be that if the shift to free-to-play goes well on PC, we'll see something similar on consoles as well.

It sounds like the transition to free-to-play will be time-consuming, but honestly, I think this is more in line with what people wanted Evolve to be. The main complaint with the retail game was that it felt too expensive for the game you got, so this will certainly address that. Let's just hope that Turtle Rock doesn't get carried away with the microtransactions.