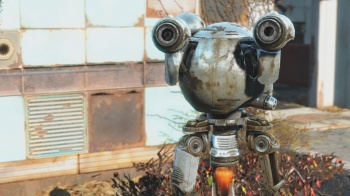 Bethesda has released a Fallout 4 update that adds more than 300 new names to the list that Codsworth can say.

Codsworth, one of your available Fallout 4 companions, has received an update from Bethesda, adding more than 300 new names to his vocabulary. If your name is included - there were previously already more than 900 different names available - Codsworth would call you by name. From Capricorn to Cena, Elektra to Hellcat, you have a good chance of being covered. Still no "LizBro," but that's likely more my fault than Bethesda's. Thanks to Reddit, there's already a list available.

The patch - 1.6 - is now live on PC, with Xbox One coming next week and PS4... well, Bethesda is "working on timing" for that version.

Other new features in Patch 1.6 include ExitSave - exiting to the main menu creates one of these, but it will delete itself after you load it - and support for upcoming add ons, in addition to bug and performance fixes.