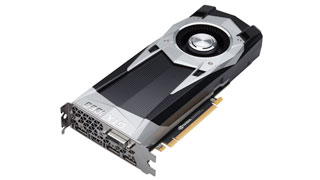 Nvidia's newest video card crams more power than a GTX 980 into a $250 package.

If you've wanted to get in on the new Pascal-based Nvidia cards, but didn't want to shell out $400 or more, your time is coming. Nvidia has pulled the cover off their newest video card: the mid-range GTX 1060.

The GTX 1060 will feature 1280 CUDA cores, 6GB of GDDR5 memory clocked at 8GHz, and a boost clock of 1.7GHz. According to Nvidia, you can 'easily' overclock that to 2GHz or more. The card is powered by a single 6-pin connector. The only catch is that it won't support SLI.

Like the GTX 1080 and GTX 1070 before it, the GTX 1060 will be available in a "Founder's Edition" that will carry an extra $50 on the price tag, and feature a blower-style cooler similar to one on the more expensive cards, only plastic instead of metal. There will also be numerous versions of the card available from Nvidia partners like EVGA, Asus, Gigabyte, and others.

Nvidia says that the GTX 1060 is not only faster than the GTX 980 (its $400 older cousin), it's also 15 percent faster and 75 percent more power efficient than the recently-released AMD RX480. The RX480 is likely the reason we're seeing the GTX 1060 this soon after the launch of its more powerful siblings. Nvidia isn't about to wait a few months and give AMD time to solidify a hold on that market, especially not if the GTX 1060 outstrips the RX 480 as much as they claim.

The GTX 1060 will be available from retailers on July 19, but if the last two cards Nvidia released are any indication, you might want to be fast on the draw. The GTX 1080 and GTX 1070 are still facing inventory issues at many retailers.

You can see off the official info on the GTX 1060 on Nvidia's website.