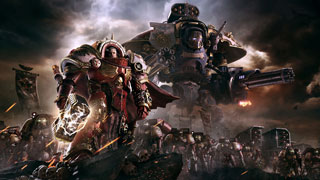 This narrated gameplay video shows of base building, combat, and more from Dawn of War III.

Since Dawn of War III was announced in May, it's been on the radar of strategy fans everywhere. We've seen bits and pieces of gameplay so far, but the newest trailer shows up over 12 minutes of gameplay narrated by Game Director Philippe Boulle. The footage features the Space Marines taking on the Eldar, and shows off multiple types of units, including the Imperial Knight.

All the gameplay shown here is pre-alpha, and that means that it could change dramatically before the game launches next year. That said, it's a good look at the direction the game is moving in, as it shows off the new art style, some base building, and plenty of combat.

Dawn of War III is slated to release sometime in 2017.