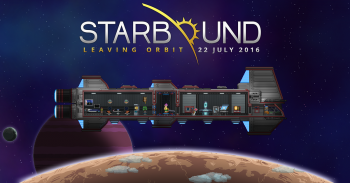 Starbound is finally coming out of Early Access on July 22.

Starbound, the Terraria-esque space exploration and construction game from Chucklefish, is finally leaving Early Access and getting a full release. The 1.0 retail release of the game will hit at the end of this month, on July 22. Of course, despite the big 1.0, Chucklefish is committed to the continued support of the game with additional patches following its release.

"While Starbound will be finished in two weeks, this isn't the end. We will continue to update and support Starboundfor as long as we can. We've got loads of cool ideas we couldn't fit into 1.0 but hope to put into future updates," wrote the developer in a blog.

Starbound first hit Steam's Early Access program almost three years ago in December of 2013. At the time it was fairly bare-bones, lacking many of the quest and progression features that made "spiritual predecessor" Terraria so popular (one of Starbound's lead developers previously worked on Terraria).

The 1.0 release will come with a full story mode, as well as dozens of improvements to many aspects of the game.