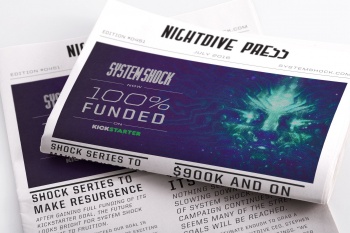 The System Shock remaster has raised the requested $900,000.

If Bioshock was too far removed from its "spiritual predecessor" System Shock for your tastes, you are probably interested in the System Shock remaster from Nightdrive Studios that hit Kickstarter this month. Well, all you old-school shooter fans will be pleased to know that the project has hit its $900,000 funding goal, which means it will be making its way to a PC or Xbox One near you some time in the future.

"Thank you, backers! System Shock is coming back!" announced the official Nightdrive Studio's Twitter. The "remaster" will actually be a complete remake of the game from the ground up using the Unity engine, and is currently slated for release on PC and Xbox One in December, 2017.

"There's no possible way I could convey how grateful the Nightdive team is to the 14,000+ backers who put their trust in us - we're having a lot of fun remaking System Shock and we owe it all to you!" added Stephen Kick, CEO of Nightdive Studios.

Be sure to check out the game's Kickstarter page for more info and updates on the project.